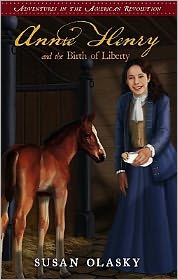 Annie Henry and the Birth of Liberty

In 1775 Patrick Henry’s ten-year-old daughter, Annie, tries to concentrate on her day-to-day activities but is increasingly caught up in her father’s role in the colonists’ growing unrest. This title was on the Crown list in 1994 and has been republished as a set of four books. By request from the publisher an endorsement was given by Sandra Morrow, the originator of the Children’s Crown Awards.